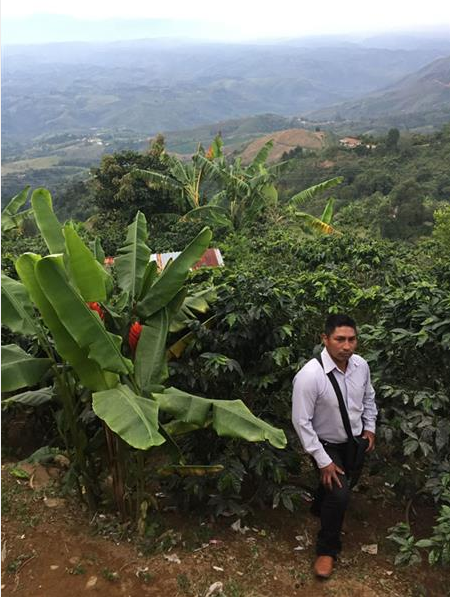 CAUCA, Colombia — Plenty of positive coffee-related stories are coming out of Colombia; this one, however, pre-dates the start of November 2016’s peace process.

The meeting-place has been set but for our own safety, we won’t be gathering at Luis Fernando’s homestead in the department of Cauca. Instead, this group of journalists and a team from Illy Caffè, including Anna Illy from the Trieste-based coffee exporter, are escorted up into the mountains to a coffee plantation belonging to mutual friends, the Suniga family. It takes a good 40 minutes to traverse the stony track to the Farm, hairpin bends and unexpected rocks bouncing us along up to 1,790 metres above sea level.

Luis Fernando leaps out from the open boot of a 4×4 truck, a short and extremely well-groomed man, barely a crease in his shirt despite the bumpy ride. A former Revolutionary Armed Forces of Colombia (FARC) commander in this region, he used to lead a squadron of around 50 rebels — until he left the organisation around five years ago. These days, he heads Toribio Cauca coffee co-operative.

Leaving FARC isn’t quite as simple as ‘leaving FARC’. Luis Fernando and his number two negotiated an exit plan but his number two was killed before he could taste civilian life. By whom? It’s a grey area but it’s easy to imagine. And given that he spent 25 of his 36 years as part of the guerrilla grouping that terrorised Colombia for 53 years, it’s little wonder that Luis Fernando talks in shades of grey rather than black and white.

But one message is clear, according to Carlos López, head of Ascafé small coffee producers’ association: “Peace is the main subject and this group of people started working towards that long before the peace process began. Coffee has always been an engine for change; it helps people move away from violence.”

Luis Fernando’s past is undoubtedly complex and murky, and given that he started the process of leaving FARC in 2012 means he joined, or was likely forced to join, as a primary-school age child soldier. His version of civilian life is what he has learnt in recent years, running a small farm that harvests both arabica and avocado, respectively in the first and second halves of the year, crops that can grow side by side and make his land more profitable.

He says: “I was a guerrilla leader in charge of several zones and that gave me an income. A typical day started at 4am, tasks could be assigned at any time of day such as cooking for everyone. We would be in bed by 8pm.

“But I Ieft FARC because I wasn’t making much money. I wanted to provide better for my family. And, I convinced the youngsters [who left the movement with me] to join me in the coffee business.”

Wearing a dove grey shirt, black trousers and tan leather shoes, a satchel slung diagonally across his chest, Luis Fernando certainly sports the image of a successful businessman. He’s certainly organised: Toribio Cauca coffee co-operative produces 50,000 kilos of arabica a year sourced from 50 growers, almost all of whom are ex-FARC rebels. Luis Fernando sells those ripe red cherries to CafiCauca co-operative to prepare for export which, in turn, are purchased by Illy Caffè. And, he says he has coffee to thank for the fact that he stands in front of us today.

Luis Fernando adds: “I’m alive due to my current work. [They] killed my friend, my second-in-command. All I can do is work the land hard.”

The future looks positive, however, and Luis Fernando is keen to expand his small empire while sharing his knowledge. And with Colombia’s peace process in motion, increasing numbers of ex-FARC guerrillas are looking to turn to coffee as a way of earning a living. Luis Fernando adds: “I had a meeting last week with some former fighters who want to join us in the next few weeks.” His advice to them? “Leave the past behind. Throw yourself into work. Be productive. Let’s work.”

As for the fact that he spent most of his life as part of a Marxist guerrilla grouping yet now sells his coffee to a multinational, Luis Fernando breaks into a smile for the first time this afternoon: “That’s life,” he says.