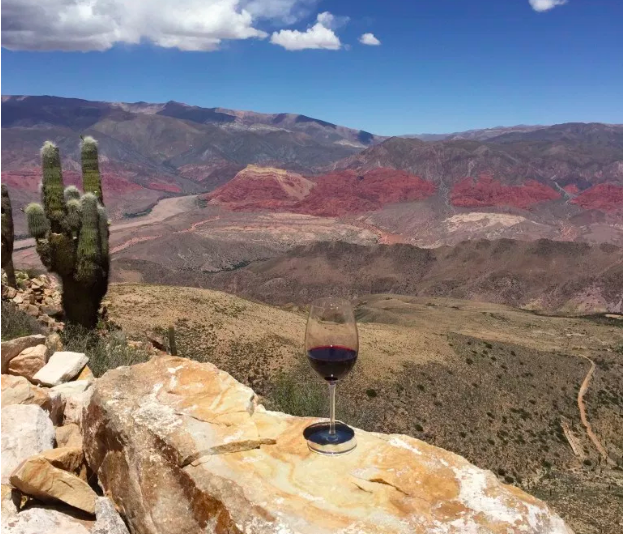 (Decanter) While Uco Valley and Cafayate are Argentina’s benchmark for making wine at altitude, the Quebrada is taking those extremes to new heights; it is home to the world’s highest vineyard at 3,329m above sea level. Granted Geographical Indication (GI) in 2015, just 12 years after the first commercial plantings, what the tiny 22ha Quebrada lacks in size it makes up for with flamboyant character. The Quebrada’s winemaking story is both new and extreme, starting at 2,192m altitude in Chañarcito and ending 50km north and 1,137m higher near Uquía. When a law that permitted only tobacco and sugar cane plantations was relaxed in 2003, agricultural engineer Fernando Dupont saw opportunity.

His pioneering Bodega Fernando Dupont is Quebrada’s largest producer, bottling 23,000 litres a year. Once his 5ha of Malbec, Syrah and Cabernet Sauvignon vines in Maimará were up and running, he enlisted winemaker Marcos Etchart of Bodega San Pedro de Yacochuya in Salta, who recalls: ‘Fernando planted vines on the mountain and went up, rather than down, to ensure he’d get grapes.’ The lofty view from the tiny wooden tasting room located at 2,400m above sea level is one of countless unique vistas in the Quebrada: to the east, zigzag brush strokes stain Mt Paleta del Pintor, while 3m-tall cardon cacti tower above vines. Fernando’s wife Amelia guides visitors around the vineyard and small winery, then through a tasting of wines such as the Pasacana blend, accompanied by local charcuterie and fresh goats’ cheese, and the ever-present breeze that keeps vines healthy.

While Etchart was the first oenologist to embark on the Quebrada adventure – he also consults at Claudio Zucchino near Uquía and Maimará’s Molino de Chicapa – he’s since been joined by an all-star winemaking cast. This includes Lucás Niven at Amanecer Andino and Yacoraite; José Luis Mounier at Tukma; Gabriela Celeste at Viñas del Perchel; and Alejandro Sejanovich at Huichaira. And although the Quebrada’s portfolio is slim at 20 wines, it’s promising: 14 of the wines were rated in Tim Atkin’s 2018 Argentina Report and every one scored over 90 points.

What started out as Alfredo González’s hobby a decade ago has turned Amanecer Andino, located a few kilometres from Purmamarca, into a family-run winery business. Cross the Río Grande via footbridge – the only access during summer when the valley’s main tributary floods with Andean snowmelt – to sample the winery’s range at the stone-coloured bodega that blends seamlessly into the mountains. Alfredo and his son, Alfredo Junior, pair locally sourced charcuterie such as llama hams with their eponymous Bonarda-Cabernet Sauvignon blend at a tank-side tasting. For the rest of this please visit Decanter.