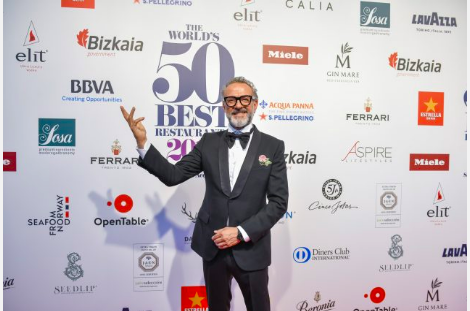 (The Drinks Business) The three Michelin-starred venue run by Massimo Bottura jumped up a place from number two last year to the coveted number one spot, while last year’s number one, Eleven Madison Park in New York, slipped down to fourth following a three-month refurbishment.

Following votes cast by a global 1,000-strong panel, Gaggan of Bangkok moved up to fifth place and Mauro Colagreco’s Mirazur in Menton shifted up a gear from fourth to third, with El Celler de Can Roca in Girona also moving up a spot to second place.

Bottura, who trained under Alain Ducasse and Ferran Adrià, is known for darting between the tables at his 28-seater site and deconstructing his dishes for his diners.

Revisiting and reinventing the flavours of his childhood, Bottura’s creations are inspired by music, art, film and literature. Giving seasonal Italian ingredients a modern twist, each dish tells a story and takes its recipient on a journey.

Among his most famous plates is his Five Ages of Parmigiano Reggiano, an ethereal composition of Parmesan sauce, mousse, foam, crisp and air aged between 18 and 50 months and served at varying temperatures.

On his return to the top, Bottura said: “It’s a better restaurant than it was two years ago as the team is stronger, we are more mature and we are evolving together.”

For the rest of this, please visit The Drinks Business.